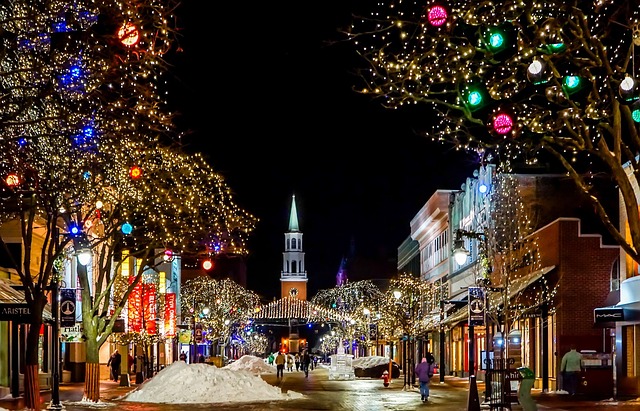 Based on where you live, you have possibly viewed a house with crazy glowing Christmas lights that change color and dance to music. Almost every neighborhood or city has "that one home" that goes all out for the holidays annually. In my area, that house is mine. If you have ever wondered how those screens work and what you will need to create your own, this is going to be an overview of all the elements and how everything works together.

Three key things make up a Christmas lighting show: the sequencing, the control circuitry, as well as the lights.

The lights are organized to form different props like leaping arches, snowflakes, stars, legatees, and much more. You couple those lights with power supplies and controllers to make them function as expected.

There's specialized computer software that informs the controls when to turn the lights on and off based on the audio being played. These components are in the core of each light show, and we will discuss in detail for each one.

While you won't get time to go to Walmart and choose this stuff, there are numerous companies and a large, supportive community willing to help.

The most popular type of lights you see at Christmas is conventional incandescent bulbs or more newly, LEDs. These strings turn on with 120V (from the US) when you plug them into the wall and remain lit until you disconnect them. Those are regular Christmas lights.

Around 10-15 years back, however, people began connecting them to digital switches known as relays that permit the lights to be turned on and off using a simple microcontroller. This is the exact same technology found in today's smart wall sockets, but with a more festive approach.

A standard holiday light screen utilizing this technology might have had a couple of such relays establishing an equal number of light strands. This technology was excellent for a couple of years although eventually, things began to get more elaborate.

The next big jump in technology came about 5 years ago and has transformed holiday display lights ever since. 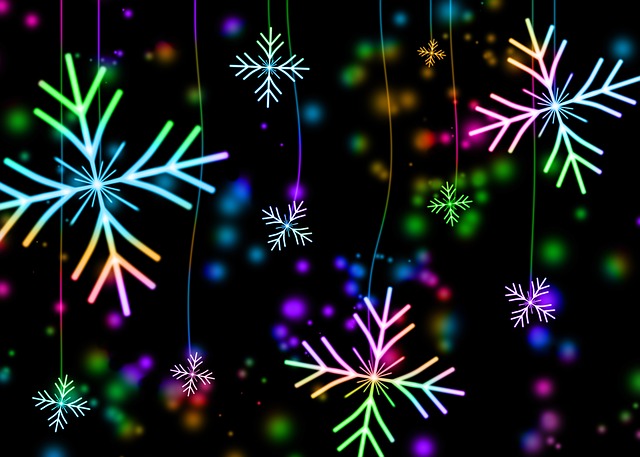 Switching on and off a single strand of lights was tiresome, and people desired more brightness, more colors, and more fancy effects. LEDs had become very common, and a new kind of light technology began to hit the market called "Pixels."

These pixels are basically a whole strand of contemporary "smart" RGB light bulbs. Each pixel has a tiny microchip that informs the LED when to turn off and on and what color to light up. They're connected in a strand and can each light up independently to form intricate patterns and influences.

There are different types of pixels and many various protocols for communicating with them. The most common sort of pixels uses a protocol known as WS2811. Basically, the pixels in a strand collect data sequentially, decode the information intended for them, and pass through the data for each the subsequent pixels down the line. The actual data that is transmitted includes a red, green, and blue intensity value for each bulb.

These types of lights and their protocols and lights were primarily designed for theatrical productions and for digital signage. The WS2811 protocol is used in advanced separately addressable PC RGB lighting layers that you might hold in your gaming equipment. The single difference is that holiday lights contain a waterproof coating, are given in strings up of approximately 10-15ft, and cost considerably less.

These lights are then arranged in groups, that's where the artistry comes into place. Various shapes can be made using corrugated plastic, pipe and custom structures to make just about any design possible. While the lights are patterned, the props are exceptional and involve substantial design effort to find out where to set the pixels. They have also to have the ability to withstand a whole winter season outside without falling apart.

Designing a show is much like preparing for an orchestra. The lights are organized in props such as arches, trees, stars, snowflakes, and more. Different groups can be grouped like instruments in an orchestra as they light up with the audio. Choreographing the various elements to sound requires special software that understands how to interface with the light protocol.

The most popular program is xLights that is open-source and free. Shows are designed sequentially with a timeline where every show element has a different track. Several different effects may be applied to individual components or to groups. Each show is unique, and the various effects can be endlessly programmed.

The software builds a grid of where the lights are with a reference photo of this venue. From here, complicated patterns can be applied to the grid to make the effects. Some effects may only light up one strand while some might move across the whole house.

When the show design is completed, the file is exported to a format that has the color data for all the lights. A standard show will also contain a refresh rate between 20Hz and 40Hz, which implies the output file, comprises the status of every bulb for each frame during the show.

All these lights are great, but they require controllers and power supplies. A standard show that you might see will have two kinds of controllers: the first is a slow computer which stores the document from the sequencing software and spreads it to all the elements. The second type of hardware utilized to run the show is the controllers that interface directly with the lights. These controllers are available in many different shapes and sizes, but all do basically the same thing. They convert the information from the display computer into the WS2811 protocol that quickly hits the lights.

The controllers get data from the show computer with the help of a protocol known as E1.31. This protocol is a system to stream lighting information over a conventional IP based network. The pixels are arranged into "universes" of 170 lights that all get routed to the same controller. Each light wants to have a red, green, and blue intensity value to ascertain what color it ought to be. If you're accustomed to DMX for theatrical compositions, it is the similar concept.

Each controller holds an IP address and understands what configuration of lights is connected to its output. If it receives a data packet from the show computer, it makes sure it's addressed to the perfect world, decodes the WS2811 data which is in the package and outputs the data flow to the pixels. 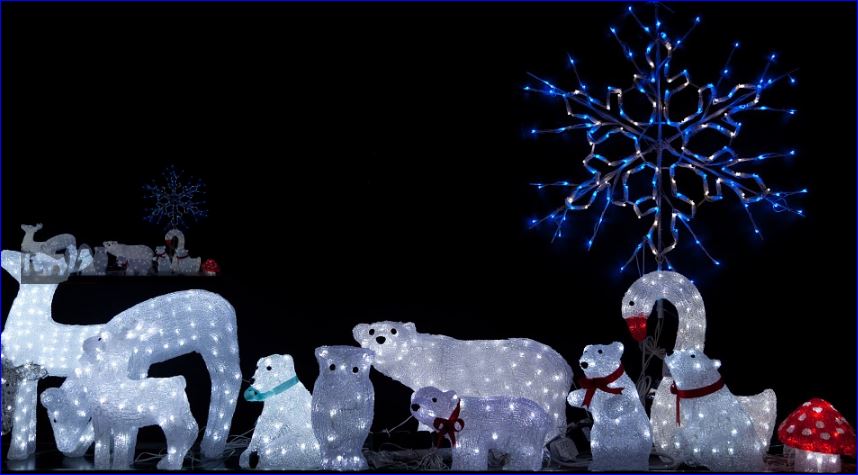 For controllers, there are two main styles that individuals will use in a light show. The first is a centralized, potent controller with a lot of outputs. The next are various controls positioned closer to the elements. Both have their advantages, and while controllers are the most common style today, the smaller decentralized controller form is currently gaining fame.

The controller we have here is a professional-grade board created by Advatek Lighting. This unit can manage up to 32 unique pixel strings producing for a total of over 16,000 pixels. As a result of its beefy power connectors, it can provide hundreds of Watts to keep the pixels bright. As opposed to utilizing than using Wi-Fi, which can get crowded if you have lots of devices, this controller has a dedicated Ethernet link. If you are seriously interested in holiday lighting, this is the type of controller you want. It is powerful enough to be utilized in commercial displays like at a theme park.

Taking a tour around this board, we begin with the main power connectors on the left side which power the lights. Pixels utilize either 12V or 5V. Therefore a standard high-wattage computer power supply can be used or power supplies primarily designed for LED lights. This board can manage both voltages simultaneously. We have 16 plugs around the top and bottom for the pixels connectors to plug into.

Most of the standard pixel types, like WS2811, use three wires: ground, power, and data. However, some other models have a clock pin also. At the core of all of this is a microprocessor that controls the signal and the connectivity necessary to interface with the pixels. There are also four driver ICs that raise the signal-level output from the chip to one perfect for driving pixels a long distance from the controller. Finally, on the right-hand side, we've got external connectivity. These include legacy DMX outputs as well as Ethernet. There are quite a few different controllers from companies like HolidayCoro and  Falcon; however, they all have a similar format.

When you have all the elements, and everything is put running together, running the show is relatively simple. On the control side, you have to tell it precisely what configurations of pixels are connected to what output interface. You can also arrange things like brightness and pixel order. Each control will have its setting either through a web interface or via a dedicated program.

The last thing you'll require is a computer to save the strings and audio data for the display. It is possible to use a laptop but among the most common kinds of show computers because of its price and accessibility is a Raspberry Pi with the Falcon Pi Player software.

During the show, it loads the strings we programmed advanced, turns on the audio related to it, and transfers the lighting data out to the controllers in the show. This computer must also need to know more about the specific controller setup so it can send information to the right address. The audio output is supplied into a portable FM radio transmitter so that somebody in their vehicles can listen to the show.

To recap, the lighting effects are first generated in software, then that software is exported into a show file which comprises the color data for each pixel at every second of the show. The show file is played from a show computer that outputs the light data using the E1.31 protocol to controllers. The controllers accept packets directed to them and lastly output the resulting WS2811 data to the pixels.

There is a lot of technology behind the scenes to create these displays, and it still has lots of room to improve. Pixels are currently becoming more accessible and straightforward to set up. Controllers are getting stronger but at the same time, more user-friendly.

It's undoubtedly too late this year to put one up, but there are lots of resources to explain to you everything you want to know. There is a great YouTube series that could teach you the fundamentals to get you started. Based on how good you're using a soldering iron and how much effort you need to put in the display, you can purchase some ready-to-run or create your own display elements.

The display can be a bit pricey getting started, but the price is dropping every year. By way of example, a strand or strip of 50 pixels will probably cost approximately $10 from China, and a suitable controller will cost roughly $200. Apart from that essential tools such as metal conduit, PVC pipe, zip ties, and hook-up cable isn't quite costly.

Make sure you enter all the required information, indicated by an asterisk (*). HTML code is not allowed.

You are here:Display Technologies»Start Planning Your Christmas Lights This Summer